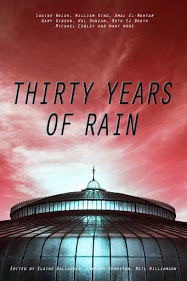 September  will see the publication of Thirty Years Of Rain a collection of short stories and poems by writers who have at some point over the last 30 years been members of the GSFWC.

The collection includes my own story The Witch At The End Of The World. A cheerful, uplifting story about the end of world. A bit of a departure from what I normally write, this is the closest I have done to being an Epic Fantasy. Except, because it is me, it isn't really that at all. Instead it is something.... odder?

There will be a couple of launches for the anthology, the 1st at the annual British Fantasy Con, the 2nd at Glasgow's Sauchiehall Street branch of Waterstones on the 30th of September from 7pm. I will be one of the authors at the Waterstones launch, where there will be readings and signings.

The full contents of Thirty Years Of Rain are as follows: