In Search of Cultural Vistas

Written earlier in the week, but only just posting now:
I was struck last night by an increasing occurrence. Where you see an amusing little nugget on twitter and you smile in an appropriate manner. Then a day, or two, later, you see the same thing again. And again. Then you see that same little nugget being picked up by both Boing Boing and Jezebel, and being passed off as a cutting edge moment.

I’m not ahead of the curve. My finger is not in the pulse. So what does this say about “news” sites passing on information that is days old? On one hand, it has always been the case. But on the other, it probably speaks to an idea of saturation, particularly on twitter. Where the medium becomes so utterly saturated and repetitive that it becomes harder to see something for the first time, instead of seeing that thing again.

Another tweet I saw last night, from the magazine Huck, about a film being shown in Manchester about the erosion of culture in New York, and the people fighting back against it. Like many things, I didn’t look beyond that one tweet, so I don’t have any details on that particular node. But it is one dot in a persistent pattern – culture in New York is dead, or replace that with London, or replace that with. And wave a hand towards gentrification. Which flags another dot in my head, from reading an article the other night in an actual physical copy of Huck magazine which I have lying around. Which was a guide to Wellington in New Zealand, how it was a cultural hot spot, the starting point for many a visitor setting out on adventure. How that has transformed over the years due gentrification. Which in turns reminds me of a video I watched on YouTube, a group of artists talking about how much more difficult culture was becoming in Reykjavik for the same reason.

I've been reading the new edition of England’s Hidden Reverse that was released recently. An updated version of the book that came out 10 or so years ago? My memory should be better on that, given I was at the launch of the version when the author spoke about it in Glasgow’s Monorail records. Anyway, book and reading, in particular the section I was reading last night was wallowing in the London scene of the 80’s – post-punk/industrial music, pretentious art wankers and confrontational bastards. All living, as the saying goes, cheek by jowl, in squats. All playing dingy little venues, where violence would erupt, partly in protest and partly because folk were arseholes. Which ties into that idea of that film mentioned above – a lost New York to a lost London to a lost cultural past.

Anyway, this isn’t supposed to be some essay, just a note, observing a couple of things that catch the eye. By contrast, I was listening to a podcast on the drive to work this morning. I tend to vary depending on mood – a selection of music played at random or a podcast. Today I picked a conversation with Clive James, and I was struck (perhaps again, perhaps more lucidly) by why I enjoy certain podcasts. Listening to two men talk about books that I will never read and likely would not enjoy if I tried to read. Or on other occasions two people talk about music I’d never listen to. It is the listening to the enthusiasm and pleasure expressed by other people. Where you can appreciate where people are coming from, you can enjoy the intelligence and engagement. Occasionally there is that nugget in there, where you think actually that is something I should read, listen to, watch, appreciate and you make a discovery. I am undoubtedly a fan of discovery, of expanding my horizons.

Though, lets not get carried away, last week I stumbled upon the worst podcast ever. An episode of a show that I listen to periodically had hit on the perfect formula – five people sitting around and talking in the most academic terms about the nature of something only really of interest to the five people talking about it. I lasted 10 minutes, I was driving, before I started swearing and was forced to change to something resembling interesting.

Though, of course, I’ll do my best to adhere to the idea of mentioning things I like while politely not naming things I am criticising. Though, I can have mixed feelings about that, particularly when everyone else is wrong. But I am only human.

I am reading Alastair Reynolds "Steel Breeze" with my lunch. The lead character is Chiku. But Chiku is not just Chiku. She cloned herself and replicated her memory. In the scene I just read the narrative has slipped, without warning from one Chiku to another Chiku. Even the character takes a moment to get her head round that. The preceding chapters being the memories of a counterpart taken into her head as her own.

With this comes an interesting way of telling a story with one character in multiple places. But also the question of identity. These two people aren't just similar, they are the same person.

This is something which particularly struck me with Ancillary Justice. For all the other aspects of that novel that were applauded, I don't think I saw too much reference to this aspect of identity. In this novel the ships are intelligent, a common enough idea, but they have use of physical bodies as tools. (The mechanism and ethics of that are another conversation) So like Chiku, we have multiple view points, but even greater sense of only one mind.

On some level playing with that kind of identity and characterization is fascinating and appealing. Especially thinking in terms of could I pull that off? 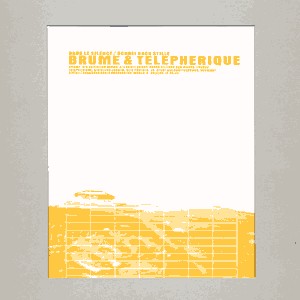 Brume & Telepherique ‎– Dans Le Silence / Schrei Nach Stille - This double LP was released in 1999, each artist building their tracks from source material provided by the other. It was released on the unprolific German label Duebel (who were related to some extent to the Ant-Zen label), they have a small run of releases, mostly limited editions, no doubt difficult to find. I have probably about 3/4 of the labels releases.

Driving home tonight, a couple of the tracks from this release came up on my MP3 player, where I have a copy of the music. Both lengthy, abstract pieces, the first from the Brume selection, the second from Telepherique. Reminding me, again, just how much I continue to enjoy this album. In doing so being conscious of the act of listening, particularly related to a work like this. The layers, the noises, the textures. Brume, the French musician Christian Renou, is described as musique concrete, though here is at the more accessible end of that spectrum. Voice samples work throughout, I assume from a science fiction film - a space ship, emergency messages. These give the piece a human element, grounding the sound work, the sculptural nature of the layers.

Here to Telepherique are at their more concrete, though verging more into noise, with a harshness to the sound. Telepherique a group of German siblings working with various artists on numerous releases like this one over the years. While I have never seen Brume perform live, I did manage to catch Telepherique twice. The first time Klaus and Rene, the second joined by Danijela.

The music of both bands is something I have a particular fondness for, they way they both achieve an immersive  experience. One which I can lose myself as a listener. So a pleasing drive home through the play of soundscapes that complimented the journey.