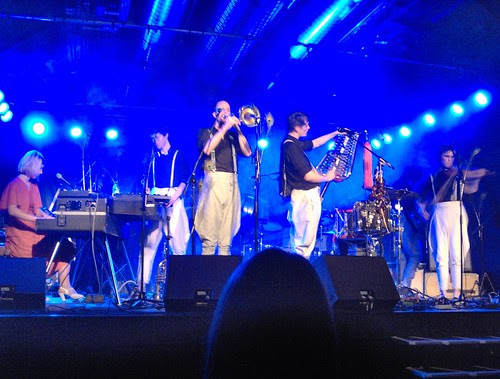 I hit town straight from work, grabbing a bite to eat. The ticket says that doors open at 7, it is closer to 7.30 when I arrive. Yet, I am the first punter to enter the hall, which is a bit of an odd experience. The same Arch I have recently seen Jello Biafra and Vieux Farka Toure is set up for the gig. Like Biafra the hall is set up for seating, the front half of the hall rows of chairs, the mid/entrance level has a handful of tables with candles on them, and at the back there is a stepped set of stairs. Other people come in behind me, ones and twos, as we spread ourselves across the first few rows of seats in front of the stage.

I've seen a lot of male solo support acts this year. Too many guys with guitars singing about nothing in particular, and making little impact. Peter Broadrick puts them to shame. A multi instrumentalist, using technology to help him out. He plays a bit of violin, has it looping away, then piano, with same result, and adds guitar. He builds each track carefully, layering the loops and instruments with his voice, harmonising with himself at times. Introducing toys, a piece of plastic pipe whooping above his head, a saw blade providing odd twangy drones. Performing a laid back and melodic set of quirky music.

After a short break, the American is back on stage, joining in with the Danish band Efterklang for their live performance. Apparently there are a couple of core members in the band, with the numbers made up on stage. So tonight Efterklang has seven members, 6 men dressed in peculiar white/grey trousers, baggy things coming down to a tight mid calf, with black shirts, the front man adding a little gold sequined cape to his outfit, purple ribbons at his ankles, while a blond girl in a red dress completes the line-up.

From left to right, the girl plays piano and sings. Behind her the long haired guy seems to have a table set up with electronic kit, which isn't really visible from sitting, at times he also plays guitar. Then we have the bass player, who at times also plays keyboards, resting on top of the piano. At the front and centre of stage we have the brass section, the tall, skinny guy with his trombone, trumpet and french horn. Beside him the front man, with his punky hair cut, little cold cape, providing lead vocals, though they all sing, with a half drum kit at his side. Behind there is the full drum kit, but by the nature of the band, the drummer also plays trumpet and sings. Next Broadrick, with his violin, guitar, and a flute. Leaving the lead guitarist at the far right of the stage.

In the UK Efterklang are signed to the Leaf label, a curious little label. Responsible for such eclectic bands as Asa Chang, Murcof and A Hawk And A Hacksaw. With that EFterklang's sound fits right in, upbeat, layered and distinctly eclectic. Part eccentric folk band, part state of the art electronica, combining the two into a striking and entertaining mass on stage. The brass gives a distinctive sound, particularly when the two performers are working at once, similarly the extra percussion gives the sound an extra punch. A chorus of voices always gives a band like this an edge, for me, 6 or 7 voices joining and building have a power to stir emotion, contrasting the more minimal and stripped sound of electronic blips and bleeps. 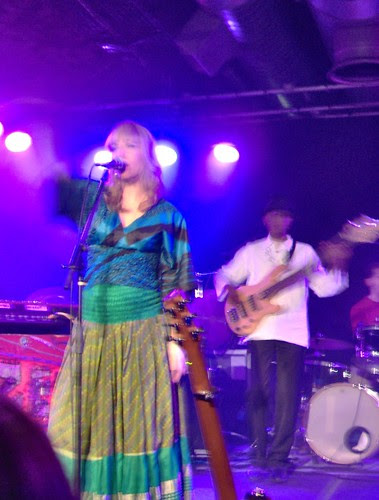 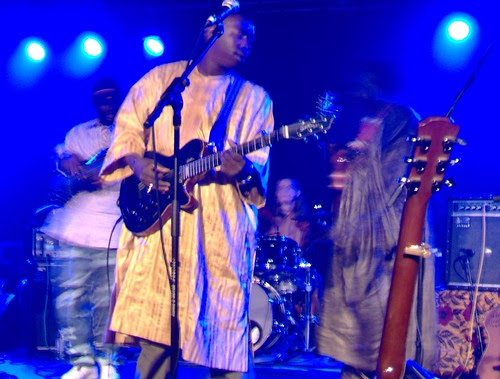 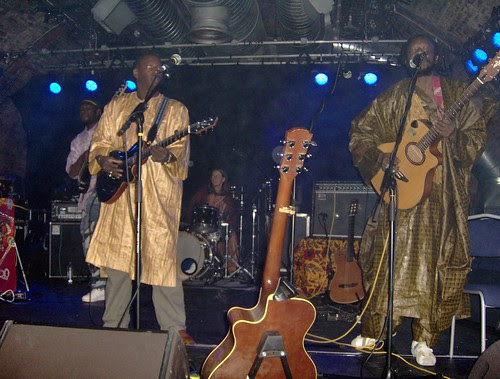 Zeep are introduced as being a Brazilian band, though it is also suggested that they are made up of musicians from London. Mike the keyboard player seems to be the core of the band, backed up by a bassist, guitarist, drummer and a girl singer in her colourful Brazilian dress. Their performance is well received, though really not to my taste at all. I am looking for something a bit different, and this strikes me as being cliched and nostalgic music. The kind of world music that makes world music seem a little cringe worthy and dull to an outsider like me. The highlight of their set is when they are joined by Vieux, but even then they don't do anything interesting.

Ali Farka Toure was probably the most well known African musician of his generation, his son Vieux follows in his footsteps, even if Ali did have initial reservations. I admit, I don't really know Ali or Vieux's music. But having seen and enjoyed Tinariwen earlier in the year, when I read that Vieux is from Mali as well, I thought that he might also be worth seeing.
On stage Vieux plays guitar, backed by a young bassist and drummer, backed by an old percussionist and guitarist. The sound is a kind of blues influenced rock, Vieux's guitar work dominating the pieces. The older guys get into the groove of the sound, eyes closed and caught in deep concentration, dancing around at times along with the music. As does much of the audience. At several points the band are joined by members of Zeep, who drag the sound down from that charged blues, to dated hippy rock again. In the end Vieux offers a different Mali from that conjured by Tinariwen, though he and I both wear their t-shirt this night. Not quite what I am looking for, but of much more interest than the support band. 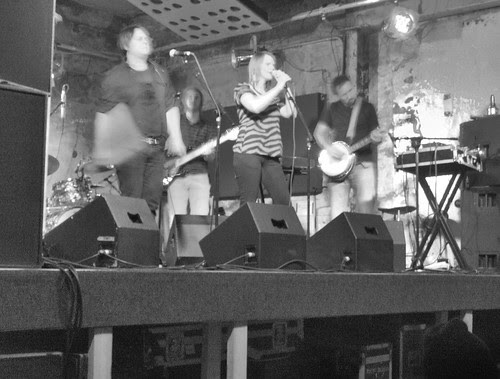 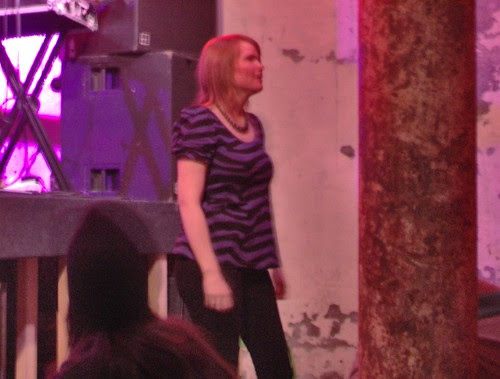 Stereo was previously up the west end of Glasgow, the sister to Mono in the city centre. Both vegan cafe/bars, stemming out of a history of bars/record shops in Glasgow. The previous Stereo closed, and has been refurbished as something else. The previous Stereo put on gigs, but was never ideal. In the meantime, a stage was set up in Mono, filling in the gap left by the absence of Stereo.

Radio Five Live has a show called Up All Night. On a Saturday morning between 1.30am and 2am they have a World Music slot. Here I have heard various world music bands for the first time. A couple of weeks ago I heard a curious Norwegian folk piece, missed the name but heard something about a music style called joik. A week ago I heard another piece of interesting music, by a band called Adjagas, who were playing the new Stereo on 24th of November. Which was the first time I had heard that a new Stereo had opened.

Following up on the name Adjagas I realised they were the same joikers I had heard previously. I watched a video on YouTube, listened to a couple tracks on MySpace, and decided I liked what I heard and it was worth giving them a go. According to the MySpace page doors opened at 7pm, which seemed a little unlikely for any gig. I got there after 8, to find that support Lay Low had cancelled due to illness - again I had looked her up on YouTube and heard something which seemed to be a "country" influenced Icelandic pop. As a result, doors won't open till 9. But it is ok; the new Stereo is a cafe upstairs and venue downstairs, so it is easy enough to hang around upstairs till its time.

Down two flights of stairs, the hall is a big space, cube chairs and tables scattered around the far end of the room, in front of the stage. The audience isn't large, 30 or so people scattered across the tables. The band goes on stage, led by the two singers, the Sámi joikers Sara Marielle Gaup and Lawra Somby. The rest of the band play drums, guitar, bass, keyboards and trumpet, providing a range of folk/rock sounds according to the mood of each particular joik.

The Sámi are the "reindeer people" or Lapplanders, the band explaining that there are only about 300 people who still speak their language, up in the northern tundra of Norway. The name Adjagas apparently a Sámi word describing the state between being fully asleep and fully awake. To start each song, the singers tell little stories, of the chaos of modern life, the pressures, contrasted by the forests, the endless night and the white tundra. The singing has a tribal sound, the tones and patterns, the integration of animal sounds. The male and female voices work off each other, though the two singers take turns doing solo, accapella joiks as well. At times the music is perhaps fairly regular, a folk/rock sound, though the electronic elements and trumpet add another level to the music. But it is the vocals, the harmonies and contrasts, which make Adjagas really interesting. 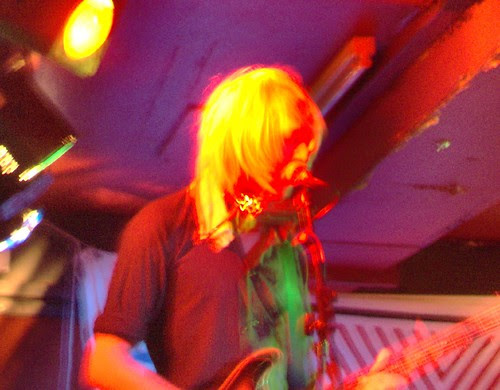 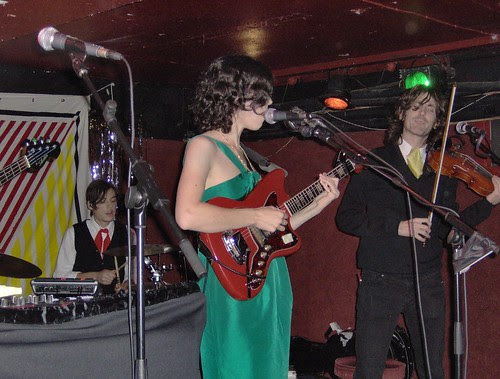 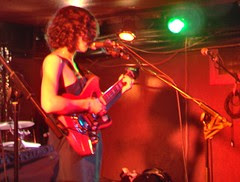 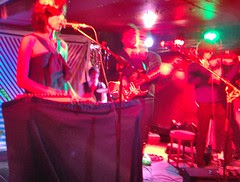 Doors open at 7.30 or 8 according to an online site trying to sell tickets for this gig. Not very reassuring. St.Vincent’s MySpace page said 8. So I aimed for about 9, arriving slightly before. The basement of the pub, which has been used as a venue for these kind of gigs for so many years now, is not too busy, though busy enough that there are no tables left. I find a free seat anyway, and settle down with the book I thought to bring until the support comes on.

Support is provided by Peter von Poehhl, though this I find out from a flyer the night after advertising the single he had on sale at the gig. A solo singer with guitar and mouth organ, his vocals are breathless and airy. Edging towards the high end, some how fragile and whimsical. At times it seems like he is trying too hard to achieve a vocal style to go with the music he was making. On the whole, his sound was likeable enough, though not really to my taste.

When William Gibson blogged about an artist called Annie Clarke I admit I confused her for Anne Clarke, who is a different person altogether. Coming out of the Amiina gig at the start of the month, I saw a poster advertising St. Vincent later in the month. The girl in the picture looked quirky, reminding perhaps a little of Regina Spektor. Looking St. Vincent up I came across the video for Paris Is Burning, the same video I had seen when Gibson blogged about Annie Clarke, so it was at that point I put it together. The same day I watched the video, I was in a record shop, and came across her debut album Marry Me. Which I bought, and have been listening to through the last 2 weeks towards this gig.

Marry Me is an album that I find a little bemusing. There are bits of it that are pretty cool pop tracks, and then there are other bits that come out of nowhere, and leave me scratching my head. Overall it is an album which has left me a little conflicted. Regardless, I thought to hell with it, might as well go see her live, see how that works out. And, to a degree, St. Vincent’s music comes to life on stage, and makes more sense, for me at least.

On stage, Annie Clarke was joined by a drummer, a violinist and a bassist/keyboard player. The three guys were in waist coats and cravats, Annie was in a green dress, which added to the air that they were a kind of weird lounge band. The feel of the music had that laid back pop sound, casual and easy going. Contrasted by twitchy moments, where Annie would jerk and dance, lashing at her guitar, and cranking up the energy. At times stamping on a board at her feet, to create personal rhythms. The result being interesting and unpredictable, veering from easy going to rock out. Many of the tracks were familiar from her album - pieces like the obvious Paris Is Burning, the title track Marry Me, Now Now, Your Lips Are Red , All My Stars Aligned and the new single Jesus Saves I Spend.