Venus As A Boy is the third novel by Luke Sutherland, musician turned writer. Sutherland was born in England, and adopted by Scottish parents who raised him in Orkney amongst other places. Sutherland played in the band Long Fin Killie, worked with Mogwai and formed the band Bows. According to the story, in book and play adaptation of the book, Sutherland was approached by a skin head after a gig. The skin head said he knew a male prostitute, an Orkadian boy working out of Soho. A man called Cupid or Desiree, turning to gold, who remembers Sutherland from Orkney - there weren't too many black boys there, beaten and called names.

Sutherland chased the skin head off, but not long after a box of mini discs arrived at his record label. The life story of Cupid, parts of which Sutherland recalled from his childhood, parts which he didn't. Regardless he felt compelled to transcribe the story, publishing Venus As A Boy after Cupid's death. In 2003 with a proof copy of the work, he bumped into actor, writer, director Tam Dean Burn. Tam a Scot, living in London, who had lost track with Sutherland, but having read about Venus, was interested in catching up and discussing the project.

From 2003 to this summer, the pair worked with co-director Christine Devaney, to adapt the book into a one man show. The show debuted in Orkney, though I gather the novel had previously had a mixed reaction from the islanders thanks to their depiction. Since then it has toured, like Cupid working its way down south - part of the Edinburgh Festival, a session in London. Having skipped Glasgow, the production returns now, for a run in the Citizen's Theatre. Presented in the studio theatre, with limited room, the entire run has sold out.

The room is a square, 3 steps of seats round the sides, the audience sat on cushions, so all in all fairly casual. Tam and Luke enter the room together, and Tam explains the history of the story, taking on the part of Cupid in the process. Tam takes us from childhood discoveries and sexuality, through to adult despair. From a tough childhood in Orkney, through visions of heaven and angels, to a suicidal adulthood. The boy is named Cupid by his first girlfriend when she discovers his magic power - to give anyone incredible sexual pleasure. His blessing and his curse.

The performance is mixed with live music from Sutherland, a soundtrack of guitar and violin, layering atmospherically at key points. It feels strange to have Sutherland as on looker, standing an arms breadth away from where we sit. Other than his instruments he is silent, nods every so often in response to Cupid's prompts, adding occasional other gestures. It feels, in someway, like Luke is more of a witness to the performance than we are - the perpetual black boy who Cupid stops and nods too in acknowledgment.

Venus As A Boy is part fairytale, part tragedy. It is suggested it is a true story, but with angels and a golden child, there will be doubters. With only two people in performance, the piece is restrained, but has a definite energy as Tam works out the part derived from Luke's words. 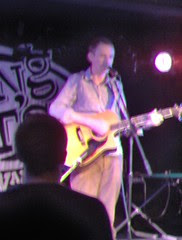 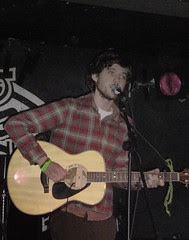 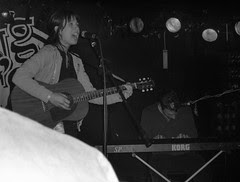 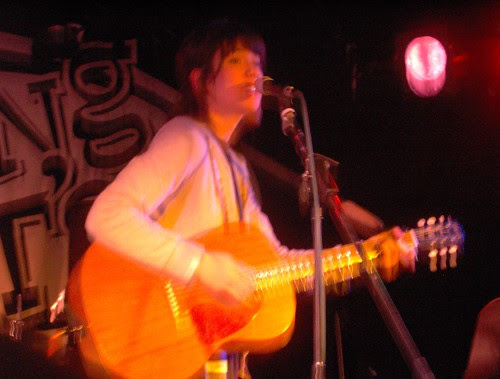 My brother is in town, with a list of gigs to go to while here. Sunday the 4th and he has decided to go to see Elvis Perkins. We sit and watch videos on YouTube for Perkins and other bands. Perkins fails to interest me, no big deal. Someone called Emmy The Great is playing as well, but being familiar with Perkins' album he has his plan set. We watch Emmy clips anyway, and for me it looks like she has potential to be fun.

We go exploring, hanging out and doing stuff. Eventually my brother says, hell, let’s go see Emmy then. And I say sure, lets. We have dinner, wander passed buildings being demolished to take pictures, before heading to King Tuts (my second visit to the venue in a week, having not been there in ages). There are a couple of support bands listed, we've pottered about long enough to miss the first, which is okay with us. Ball Boy takes to the stage as we arrive, or at least, as he explains, one quarter of Ball Boy. A set of acoustic guitar and vocals, typical singer/songwriter stuff - which can be a clichéd average thing to see, but in this case it isn't. The songs have a certain magic - a man dreaming of flying to the moon, quirky love songs, and the like.

Next we have Young Husband, a member of Emmy's band, who comes up and plays a few tracks. Decent enough stuff, complimenting the evening as a whole. After that Emmy takes to the stage with her band, each member being introduced as being (a member of) another band. It just seems to be that kind of scene that they are all involved. Emmy is young, though getting older all the time, as this being her birthday proves. She apologises for wearing orthopaedic shoes, explains its because Glasgow is cold. At another point, while introducing a song she says the last time she played Glasgow it was so cold she couldn't get her hands to play the chords right and she had run off stage crying. Thankfully she doesn't run off stage, and has come prepared for the cold.

Emmy plays the guitar and sings, backed up by a guitarist, drummer, keyboardist and guest backing vocals. The music is a kind of folky poppy thing, which is pleasing and quirky. At times she reminds of Regina Spektor in aspects of her performance, so it should be no surprise that she covers one of Spektor's songs on her EP. The EP, which was on sale at the gig, also includes a Pixies cover - I suspect she played that live, though it didn't click in my head till I heard the recorded version.

Emmy The Great appealed to my sense of humour, with the quirks of her performance, and the form of her songs. The quality of her voice suits the quick little pop songs, strung together over the course of an hour or so, to provide a quite delightful night.

In May Amiina played a handful of dates in support of pre-release of their debut album Kurr, a disc that at that point was only available at the gigs. With the album out officially, the Icelandic quartet return to the road for a month in Europe. Before the band played Mono, where they had played years before, and was the debut live performance for some of their tracks. This time they play King Tut's Wah Wah Hut, the line up expanding so that the four girls are joined by a guy on drums, and the soundman playing trombone once or twice.

November the first, the clocks just recently changed, its dark and miserable, and so am I. One of those nights where I feel like I could happily sleep instead of going out. But I drag myself out, doors open 8.30pm, I get there just before 9pm. Like last time, support is a single guy with a guitar, doing nice but not especially interesting singer/guitarist material. For his third last track he is joined on stage by two of the Amiina girls, for second last the other two girls switch places, with contributions from Amiina's drummer as well. The guests offer an enhancement to the sound, but it still isn't what I am after.

Amiina take to the stage about 10pm, play till about 11.20 or so. This time round I am more familiar with their sound having seen them in May and hearing Kurr - while before I had only heard the original 4 track EP. Lush melodic soundtracks to fairy tales, constructed from a multitude of stringed instruments - violin, guitar, harps and cellos. Mixed with keyboards, accordions, glasses of waters, and reception bells. The girls are multi-instrumentalists, and as the layers of sound dance around, so do they, carefully trading back and forth as they swap from point to point to play which ever sound suits that moment in time, taking care not to bump anything/one else. The sounds are as ethereal and delicate as last time, though the inclusion of a drummer adds an anchoring weight. Providing a density to the sound, without becoming overwhelming, which has to be a concern for this type of music.

Conclusion comes as before with the bleepy electro of Moscow Subway, and while they don't have the saw quartet, they do have a saw to play warbly oddness. With tour's end the girls are playful and giggly, adding to an infectious mood, which makes the listener feel lighter and easier than I had when arriving. 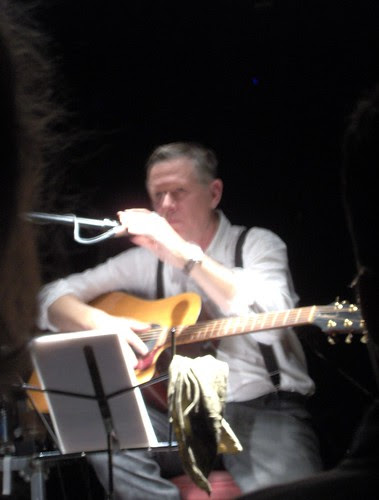 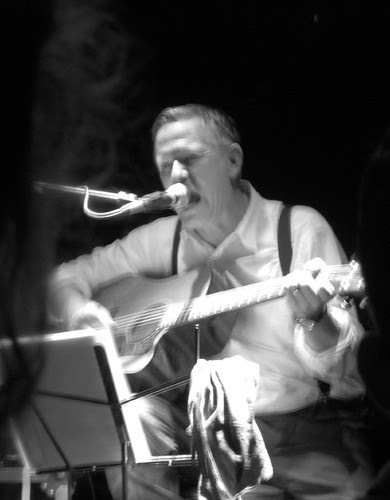 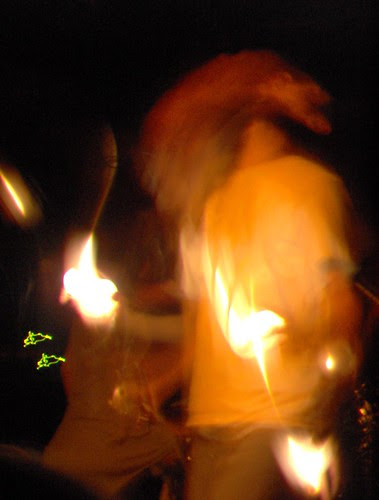 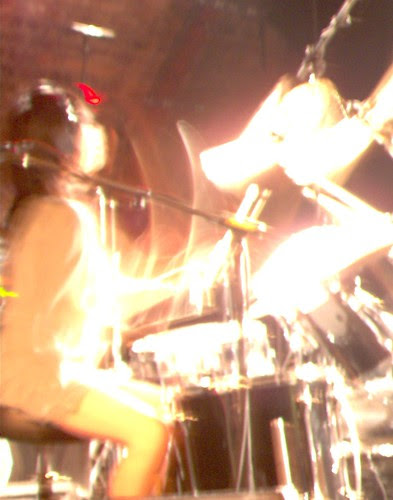 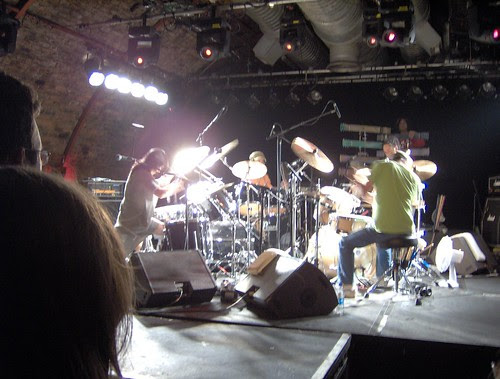 In the back Arch, in the Studio Theatre, there is a performance of James Kelman's Herbal Remedies, a show I saw the other week and have yet to write about. But tonight there is a contrasting event, requiring the front doors to Arch 1 to be opened as a separate entrance. There is a bustle at the ticket desk, which gives the initial impression of a crowd. Instead its a bottle neck, and having had a ticket for months, I bypass this line and enter Arch 2 through Arch 1. It is still quiet at this time, the bar open in Arch 3, with folk sitting about, a table of t-shirts and a handful of CDs for sale.

The hall fills up steadily, a crowd gathering at the stage in anticipation. A chunk of the crowd are here just to see Michael Gira. A cult musician, ex-member of the influential band The Swans. He comes on stage in a jacket and hat, takes both off, props them on a stand. Balances on a stool, prepares a stand with his laminated music and lyric sheets. A grey haired, respectable looking gentleman, with an acoustic guitar preparing to play music. Gira is not someone I am hugely familiar with, I know some Swans, but haven't particularly followed his career. I hadn't even known he was supporting till friends mentioned it the week before the gig. His sound was raw and apocalyptic, charged full of despair and bile. Between songs he gave an impression of being amiable and polite, though stopped half way through a song to tear strips off an offending photographer.

The Boredoms set up was similar to that of the set they performed at 2003's Instal festival under the name V-infinity-Oredoms. Three drum kits set up in a circle, the seats taken by Muneomi Senju, Yojiro and Yoshimi P-We. The set starting with front man Yamantaka Eye swinging light bulbs - light filled globes, at the end of cables, connected to contact mics or some such - so that as he spun them they lit up and faded, crunched and squealed. Three drum kits building up rhythms from there, establishing a pattern for the remainder of the set. Building and crashing levels of percussion, with Eye playing electronics and chanting. A rig sits at the back of the stage, a rack of 7 planks of wood, set up as guitar parts, struck with sticks to create discord. P-We adds her voice at times, contrasting Eye's, turns and plays out of tune notes on a keyboard, adding psychedlic moments of bizarreness.

Overall, the moments of prog-rock wibbliness were of less interest, but the up-beat enthusiastic percussion was a joy, some of the extra elements like the guitar rack and light bulbs making those sections better than the last time I saw them play.