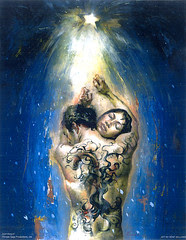 The Fountain. Three stories. Man. Woman. Tree. Woven together. Life. Death. Love. A conquistador fights a savage Mayan army, looking for treasures for his Spanish Queen. A doctor fights sickness, desperate to save his wife. A man fights the universe, for immortality. The Fountain is a mix of dreams, visions and fiction, forming an eternal love story. Mixing the Mayan mythos of the one tree as the underworld with the Nordic vision of the infinite branches of multiple realities.

Darren Aronofsky gained attention with the success of his film Pi, a quirky low budget black and white cult film, about addiction to numbers numbers. He followed that with an adaptation of Hubert Selby Jr’s Requiem For A Dream, about addiction to drugs. After that, there were various rumours about what he was going to do next. Ranging from doing the Batman film that became Batman Begins, to doing an adaptation of Dan Simmon’s Song Of Kali. Instead he chose to do the ill-fated The Fountain.

In the beginning of The Fountain, Aronofsky secured the rights that allowed him to do a graphic novel as an aside to the film. In 2002, The Fountain fell through, he flew to the set in Australia, and told the cast and crew it was over. Some time after, when he had got over the blow, he remembered the graphic novel idea. Speaking to Vertigo, the darker and more eclectic sister of DC Comics, who are responsible for Batman, they put him together with artist Kent Williams. Together they put together what would become the graphic novel The Fountain, and in the process Aronofsky was re-energised.

Remembering his roots, through the artistic process, he went back to the drawing board, stripping down the film idea so that it was something he could do, in the same way he did Pi – on his own terms. So as this hard backed book hits the shelves, we can expect a film starring Hugh Jackman and Rachel Weisz as the man and the woman to becoming to the cinema soon. Though the impression given is that the two are parallel projects, complimentary works, rather than the same story in two different mediums. With that, it will be interesting to see what the film delivers, and what similarity it bears to this version.

Particularly as the final film strips down the original film, to what degree will the film cover the scope of the graphic novel? Spanning from an epic past, through a human present, to a stripped and stark future. Williams ranges from quick and dirty life drawings to stunning and beautiful painted work. The future man, tattooed and naked and floating in space being particularly striking.

Darren Aronofsky delivers another cult work with The Fountain, even if it is a change of medium from what we usually get from him. Now available in hardback from Vertigo comics, likely to go to paperback in something like 18 months time.

Brainwashed radio have put up a Coil podcast special to mark the one year anniversary of Coil's John Balance dying. The piece is made up of an interview recorded in 1997, with a mixture of material from that period and back, some classics and some stuff that is new to me.